Did you know that you could be fined if your passenger is using a phone or a laptop when you are driving?

Laptops and FaceTime against the law

A man was shocked when he was pulled over and fined in Heatherbrae last year because his front seat passenger was using a laptop. A Sydney woman received a similar surprise when she incurred 3 demerit points because her passenger was on FaceTime during the journey.

The obscure law lies in rule 299 of the Road Rules 2014 (NSW), which makes it an offence to drive a vehicle with a visual display unit operating while the vehicle is moving or stationary (but not parked), if any part of the image on the screen is visible to the driver from the normal driving position.

Therefore, it is against the law if any part of a screen can be seen by the driver, even if the passenger is not attempting to show the driver what is on the screen.

Breaking the rule can result in a fine of $344 and 3 demerit points. If challenged in court, the fine may increase to $2,200.

However, the rule isn’t just limited to the people in your vehicle. If there is a television receiver or visual display unit operating in your car, and it is likely to distract another driver, the same fine of $344 will apply.

Exceptions to the rule

The rule does not apply to bus drivers, as long as the unit is a destination sign or other bus sign.

You will not be contravening the rule if the unit is used as a driver’s aid and is an is an integrated part of the vehicle design, or is secured in a mounting affixed to the vehicle while being used. A ‘driver’s aid’ includes:

Therefore, using a GPS with a display will not lead to a fine, as long as it is secured in a mounting, or built into the car.

If you have been charged with an traffic offence, you can contact the team at Hamilton Janke Lawyers 24/7 by calling 4038 1666. 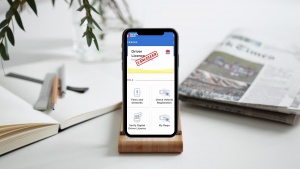