As the holiday season commences, we want to remind you of some North Pole behaviour that is not condoned in New South Wales:

In New South Wales, it is an offence to break into a house or premises and steal property. There is an array of offences under Part 4 ‘Stealing and Similar Offences’ of the Crimes Act 1900 (NSW) including Division 4 ‘Sacrilege and Housebreaking’.

Break, Enter and Steal or Commit a Serious Indictable Offence

A person can be charged with Break, Enter and Steal if they break something like a gate, lock, window, or door, enter a house or premises and steal something.

This offence carriers the maximum penalty of 14 years imprisonment.

If a person breaks and enters a house or premises with the intent to commit a serious indictable offence but it is not actioned, they will still be liable to imprisonment for 10 years.

There are different circumstances of ‘aggravation’ of seriousness of this offence depending on the conduct engaged in or the offence committed while inside the house or premises. These circumstances include having an offensive weapon or instrument, being in company of another person or knowing that there is someone else inside the house. There are also circumstances of ‘special aggravation’ including intentionally wounding or inflicting grievous bodily harm or being harmed with a dangerous weapon.

If the offending is done under circumstances of aggravation (even just the intent) a person will be liable to a maximum of 20 years imprisonment and 25 years if committed on specially aggravated circumstances.

See a further explanation on these charges on our Break and Enter Charges NSW page.

Bail over the Christmas Period

If you are arrested by police and charged with a criminal offence, they will decide whether to let you out of the police station until your Court date.

If you are arrested over the holiday period, whilst NSW Courts are closed over Christmas, the Bail Court will remain open.

If you need advice or representation for a bail application over the Christmas and New Year period, contact the team at Hamilton Janke Lawyers 24/7 by calling 4038 1666. 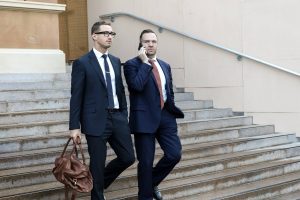