The courts are generally closed over the holiday season, so what happens if you or a loved one is accused of a serious crime and police refuse to let you out of custody? Will you have to wait until the holidays are over before you can be brought before a court to apply for bail?

If you are arrested by police and charged with a criminal offence, they will decide whether or not to let you out of the police station until your court date.

If you need advice or representation for a bail application over the Christmas and New Year period, contact Hamilton Janke Lawyers 24 hours a day, 7 hours a week on 4038 1666.

Bail can take different forms, and there are several factors that must be considered when determining whether to grant bail. 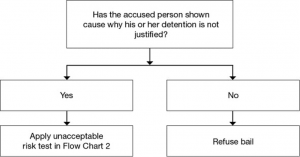 The Act does not outline the requirements that must be fulfilled in order for an accused to “show cause”. Instead, a determination will be made on a case by case basis.

However, the Supreme Court has considered the following factors when making a determination on the matter:

If an accused is able to “show cause” then the court will apply the unacceptable risk test. The court will consider a number of factors to determine if an accused poses an unacceptable risk of doing any of the above. These factors are outlined in section 18 of the Act and include:

If the court determines that no unacceptable risk exists, they will usually release the accused on bail unconditionally.

However, if the court is concerned about a potential risk, they may impose conditions on an accused’s bail in order to mitigate that risk.

Conditions that may be imposed on an accused often include things like surrendering their passport, residing at a particular address or refraining from approaching a certain person or area.

If you or someone you know needs legal advice or representation for a bail application or criminal law matter over this Christmas and New Year period,  contact the team at Hamilton Janke Lawyers 24/7 by calling 4038 1666.

Flow Charts have been taken from the Bail Act 2013 (NSW)

The Appeal Process in NSW